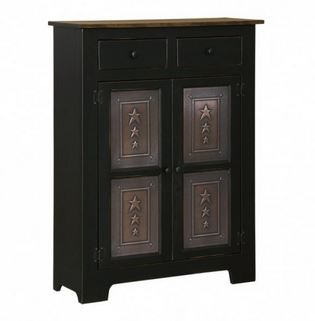 Way back in the 1800s, there were a lot of German immigrants that started moving to America. And in addition to bringing all of their customs and traditions along with them, Germans also brought a very important piece of furniture that quickly turned into an essential item in many kitchens.

The pie safe, also known as a pie cabinet, played an integral role in the early American kitchen and is still being made today.

Pie safes served two main roles when incorporated into a kitchen. First, they were a piece of furniture that could be used to store pies and other baked goods once they cooled off after coming out of the oven. Remember, back in the 1800s, there weren’t as many storage solutions for baked goods as there are today. So pie safes helped to keep baked goods cool and to prevent mold growth on them. They also played another role and that was to keep rodents, insects, and other pests away from the baked goods. Without pie safes, those living in the 1800s would have had a difficult time keeping their baked goods around for very long.

Since first being introduced, pie safes have evolved quite a bit. The earliest pie safes were often as large as bureaus, and they were made out of solid wood. They usually had very deep shelving, and they had tin doors on the front of them with holes punched out to allow for ventilation. But since then, pie safes have changed, and the designs that are used on them are different. While early American pie safes were relatively simple, the pie safes you’ll find today feature things like glass and copper doors. They are also used for more than just baked goods, as today’s pie safes can be placed into any kitchen, hallway, or mudroom and used as storage.

Would you like to purchase a beautiful pie safe for your home? Carriage House Furnishings has plenty of pie safe options. Check out what we have in stock or call us at 717-768-8712 today to order one for yourself.